125 Years of Service to the Lord 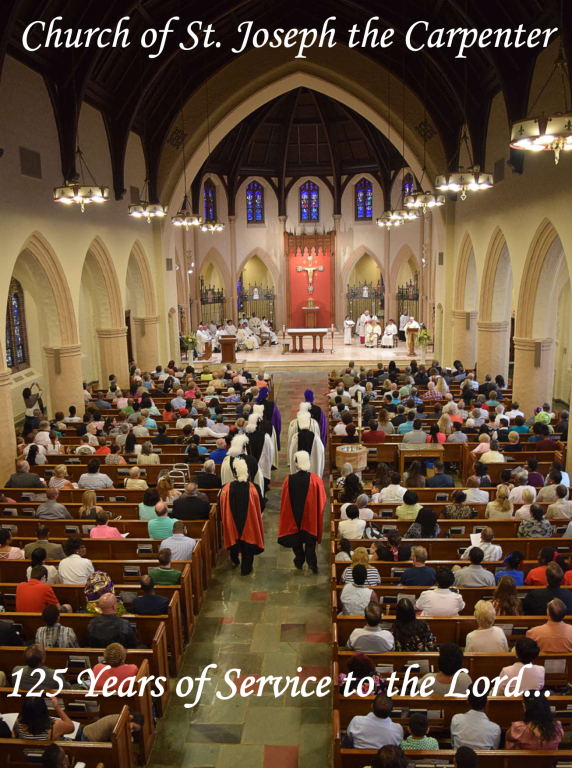 It was until 1892 that Catholic residents of Roselle needed to go to Cranford, Westfield or Elizabeth to attend Mass and receive the Sacraments. In that year we have record of the first Mass celebrated by Rev. W.J. Wiseman on Christmas morning in the old schoolhouse on Westfield Ave. That place, together with the old Charlier estate on the same street, became a “church” on many occasions for the celebration of Holy Eucharist and other ceremonies. Two years later Rev. James P. Smith, the founder of St. Joseph’s, celebrated Christmas Mass at dawn, in the dining room of the Van Court Inn during a rampant snowstorm. The hotel was used for many more services, but due to the growth of the Catholic population, the worship was moved to the Masonic meeting rooms on Chestnut Street and First Avenue. The zeal and apostolic spirit of Fr. Smith was instrumental in forming the community and erecting St. Joseph parish and realizing their dream of having their own worship building on their own property.

The following handwritten document was taken from the cornerstone of the old church:

The Roman Catholics of Roselle, N. J., became incorporated according to the laws of New Jersey, on July 24, 1895, under the title 'St. Joseph’s Catholic Church, Roselle.’ The site was purchased on October 1, 1895, from Thomas Moore and Anna Moore for the sum of $1,510. The cornerstone of the church was laid by the Most Rev. W. M. Wigger, D.D., on October 24, 1897 in the nineteenth year of the Pontificate of Pope Leo XIII.  At this time Hon. William McKinley is President of the United States, Hon. John W. Griggs, Governor of New Jersey, and Hon. William F. West, Mayor of the Borough of Roselle, N. J.

In February 1903, St. Joseph’s was separated by the Bishop from its affiliation with St. Michael’s of Cranford and was established as an individual unit with a resident pastor. The Rev. John A. O’Brien, assistant at St. Mary’s Church in Bayonne, was named the first pastor. It was a very good time for the parish, which experienced growth of a religious education program and the establishment of many societies. The following years brought establishment of Parochial School, arrival of the Sisters of St. Joseph and completion of the Rectory. The cornerstone for the school building was laid down in January 1916.

The thoughts and energies of the parish were concentrated early in 1935 upon the building of the new church, the need for which had long been apparent to Father Edward G. Murphy.
The small wooden church on this site, dedicated on May 1, 1898, was demolished to make way for the present structure. The parish also purchased property on East Fourth Avenue as a new site for the rectory, which was moved, with a few necessary alterations, from its original location on East Third Avenue. The construction of the second church was completed on June 19, 1937 and dedicated on October 24, 1937, with its new name “St. Joseph the Carpenter”.            It represents a typical rural architecture of the English Gothic style, with simple conception of the structural plan and unique brickwork of the exterior. There are about 2100 different shapes of bricks in various shades, each of which required a separate mold. The clay was pressed by hand into these molds in an old soft-mud method. The columns, arches and wall surfaces of the interior are of ivory colored plaster which was applied with the palm of the hand. The Stations of the Cross are made of pre-cast plaster, created to give the impression of having been drawn from the walls themselves. The ceiling in the vestibule is bordered with the symbolic grapevine and its leaves. The ceiling border in the passageway between the sacristy and sanctuary has symbols of the sacraments such as a shell for baptism, a chalice and host for Eucharist, etc. Entwined among these symbols is also a vine with its grapes and leaves.

For more than 80 years the church was going through different modifications and improvements, including the stained-glass windows, cast iron gates in the Sanctuary, and relocation of the Baptistry and Altar to comply with liturgical reform of Vatican II Ecumenical Council, just to name a few. The most recent renovation took place under the leadership of 13thpastor of St. Joseph’s, Rev. Krzysztof K. Maslowski, when the Sanctuary underwent a major makeover and a new Altar was dedicated by His Eminence, Cardinal Joseph W. Tobin, C.Ss.R., on August 27, 2017.

We are grateful to God that it has been almost 125 years since the cornerstone of the first church has been laid and that the Catholic population of Roselle was given the chance to worship in their own building. We pray, that the coming generations will embrace our beautiful tradition and continue to bring all people to worship our Savior and welcome any stranger with the love of our Lord Jesus Christ in their heart.